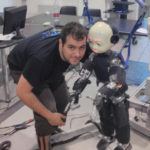 Thank you all for the excellent questions and wish you all the best for your future!